Engineering and mapping projects generally use a two-dimensional horizontal coordinate system, usually with height as a separate system.

For small projects, this could be a simple site grid, defined by a set of surveyed control points. A grid like this has no scale factor distortion, and so the relationship between plans and the ground is 1:1. But what about incorporating other data given in the national coordinate system? What about using GNSS with this coordinate system? Do we know how it links to the outside world?

As projects grow larger, above a few kilometres in extent, it becomes impossible to fit the curved surface of the Earth onto a flat coordinate system without distortion. The larger the area you’re trying to cover, the greater this scale factor distortion. By the time you get to the size of an area like Great Britain, for example, it’s up to about 400 parts per million (ppm). That means that even a 100 metre design might be 99.96 metres on the ground, and this relationship is different in each part of the grid. For high precision setting-out work, this means that corrections need to be determined for all survey measurements.

So you can have a different site grid every few kilometres along the project (but you might have to change coordinate systems half way through a railway curve design). Or you can try and tailor a projected coordinate system (such as Transverse Mercator or Oblique Mercator) so that it covers your project as well as it can, and minimises the distortion (but there is no conventional map projection that will cover the rail route from London to Edinburgh with negligible distortion). 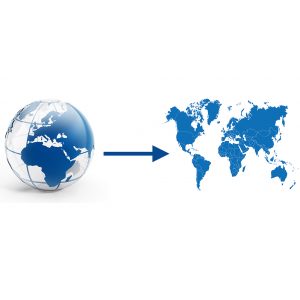 And then there’s another effect – height distortion. As you go higher above sea level, the effect on horizontal scale factor grows, by about 10 ppm for every 64 metres of height. So if a rail route or a pipeline climbs over a 200 metre hill, that’s another 30 ppm of distortion to factor in. 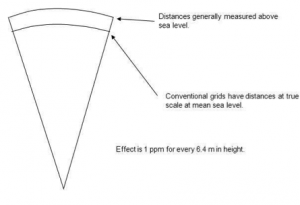